In our final student visit to Strasbourg from the 5th to the 11th May 2019, we met students and teachers from the secondary schools of Sweden (Malgomaj Skolan , Vilhelmina), Bulgaria (SOU Sveti Kliment Ohridski, Dalopol), France (Collège Vauban, Strasbourg) and England (Notting Hill and Ealing High School, London) in the European Youth Centre outside the centre of the city. We enjoyed a visit to the European Parliament where the group learnt about the important work conducted in the building as well as the structure of European politics and enjoyed a 360 degree video presentation which emphasised the importance of young people for the future of Europe. Inspired by such a start, the group took part in bonding games to get to know each other before embarking on their projects for the week.

The 5 partner schools were divided into 4 groups. 2 groups set about creating Graphic Design displays on the topic of Gender Equality, whereas 2 other groups took part in Film workshops on the same topic. The groups all contained students from the 5 schools from both genders. The work they produced was of high standard, thought-provoking and professionally made. What was most impressive was that you could see the messages had come from the students themselves and they felt passionately about making a difference for the future. During the evening, the group also watched the film ‘Battle of the Sexes’ as further inspiration on the need to fight for gender equality. Once the films and graphic designs were created, they were presented in the French school on the 10th May. The students themselves presented their work to their peers, the Headmasters of 2 of the schools and the Deputy Head of the French school. The Head of the German school, Mr Gassner, closed the presentation discussing how powerful the work had been. Finally, we visited the town hall in Strasbourg to present the work to the Deputy Mayor.

One additional interesting activity which took place during the visit to France was a series of presentations by each school on the Thursday evening about what each school had been doing in their own country to raise the profile of gender equality. The Bulgarian school talked about how they created a set of lessons to teach their peers about gender equality. The Bulgarian school extended these lessons to another local school and even involved their own Deputy Mayor. The Swedish school talked about the organisation of their school and they said that they had been creating displays about gender issues as well as conducting a survey to attempt to enlighten their fellow pupils. The French school talked about the setting up of an ‘Equality street’ in their school which we were able to visit when visited the school. The English school talked about how they had written film and book recommendations on gender equality as well as their plans for a whole school Erasmus Day with lessons including gender equality in all subjects. The German school had done research and presentations on the topic gender issues in the media and society and reacted on the results found out by the survey “How does my teachers help me learning”. They opened the presentation with their gender equality rap involving the whole audience and inviting different students to make statements on our gender topic and the week and they ended the presentations in a most dramatic fashion with their song “Quit the stereotypes” and a conga line led by our very own mascot, the ErasMOOSE! 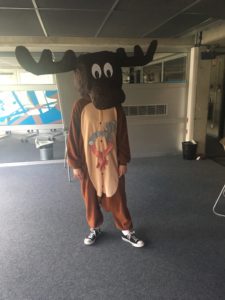